Enterprise resource planning is a common pain point for growing makers and manufacturers. Scaling up from small-batch to mass production requires more robust systems, but only a few solution providers target the middle of the market.

"Recently we ran out of labels for a product," says Justin Park, co-founder of The Real Dill, which takes a craft approach to pickle-making. "It totally caught us off-guard. We had just produced so much more than we used to. Perhaps that could have been avoided if we had a software solution in place."

The Real Dill is just one of many small manufacturers and makers in Colorado and the Rocky Mountain region that are expanding quickly -- sometimes more quickly than expected. That's where enterprise resource planning (ERP) systems shine, acting as an automated office manager, streamlining certain processes and allowing the company's workers and owners to focus on making product and expanding sales.

While large companies can use systems from IBM or Oracle, those solutions tend to be more complex than a startup or small manufacturer needs. 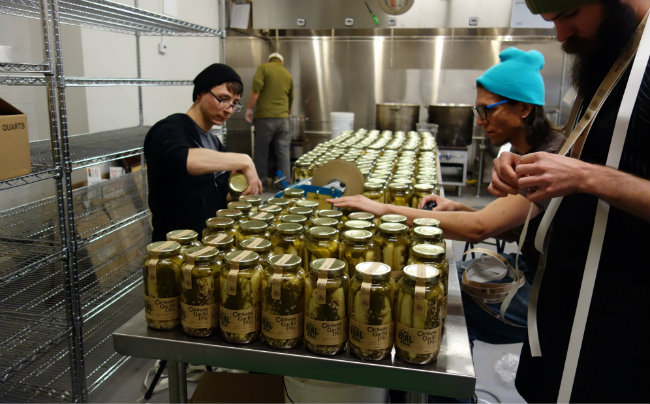 But companies like Denver's Omerica Organic and Grimm Brothers Brewhouse in Loveland have graduated from using an ever-expanding Excel spreadsheets to developing their own in-house ERP systems that meet their needs as they grow. Others like Peach Street Distillers and Rocky Mountain Soda Co. have adopted systems from outside providers to meet their unique needs.

These companies aren't abandoning QuickBooks just yet, but these robust systems are streamlining businesses and growing with them thanks to software-as-a-service (SaaS) capabilities that allow users to check in on smart devices and computers, anywhere and anytime, while developers can update and upgrade the platform to bring new tools online seamlessly for their clients.

After working in military logistics in Iraq and Afghanistan, Ryan Lorenz started Omerica in 2004. As the company began growing quickly, it struggled with fulfilling its made-to-order wooden jewelry. "As volume increased, it was hard to manage the flow of manufacturing, to manufacture all those items on demand," explains Lorenz.

He estimates upwards of eight to 10 hours a week was spent ordering materials. That's not even getting into time spent on order processing or shipments. The company began looking for something to help manage the workflow.

"We couldn't find a middle system that allowed me to take orders and funnel them into the manufacturing system and ship them and put them into the shipping system," Lorenz says. "We didn't want to have 18 different applications to manage our systems. It's much more efficient to keep all the data streamlined into a software system." 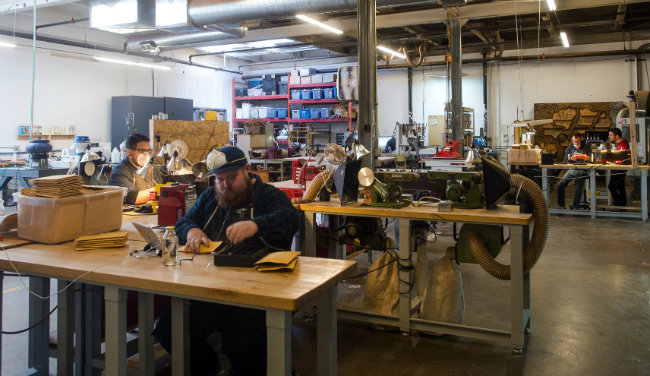 That was the genesis of The Maker System, an ERP platform Lorenz and a developer created in-house over the past eight years. "It's not just a middle-ground manufacturing system," he says. "It's not just a website. It has strong promotional builders. It has delegation systems for our whole team and staff. It actually manages all of our wholesale orders and wholesale order and clients and private-item clients."

Now all of the company's orders are handled in two hours on a Tuesday, and the shelves are stocked quickly after.

The system also helps manage employees' time. They use iPads that show them what their tasks are throughout the day. "Before the system we said, 'Here's the line of products and what we need done,'" Lorenz says.

As Omerica implemented the delegation system, he used it to see where workers were slow and discussed where processes could be sped up. Production increased by about 40 percent as the company reduced its staff from 19 people to 11 people while producing the same volume. "We're able to have people who can earn more and have better positions," he contends.

On a visit to Omerica's facilities, a client asked about the system they saw in place, which spurred Lorenz to consider selling it as a service. "Since then, we've integrated it into six companies through our beta stage," he says. "They're all very happy and we're starting to finalize the service. The service, which starts at $150 a month, centers on an online store at its core. As companies expand usage, they can add in back-end components for, say, inventory tracking and on-demand manufacturing. 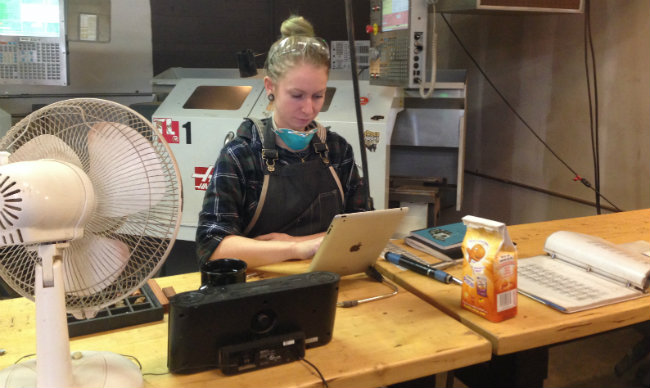 But that system might not be ideal for all users, like brewers or distillers who have a host of other issues to deal with, like complex taxes, to deal with. That's what inspired Don Chapman, president and co-founder of Loveland's Grimm Brothers Brewhouse when he began developing OpenBrew, a manufacturing resource planning service. Already three local breweries using the home-brewed SaaS, which also starts at $150 a month.

"The first time I did my Brewer's Report of Operations, it took me all day to do it," says Chapman of the requisite compliance reports for the federal Tax and Trade Bureau. "When we first opened, we didn't have any money but we needed something to help us manage the brewhouse."

With a background in engineering and knowledge of code, Chapman began by building a PHP database "so I could populate that quickly into my Brewer's Report of Operations," he says.

That was 2010. "As we grew, things kept coming up, and the system grew with it," says Chapman. "It now manages 90 percent of what we have to do” -- including the scheduling of maintenance, identifying what to order and when to order, and keg tracking, and it serves as a POS system in the taproom.

It also handles reports. "It takes 10 seconds to make a report," Chapman says. "I click a button, print up a PDF and send a check into the government." 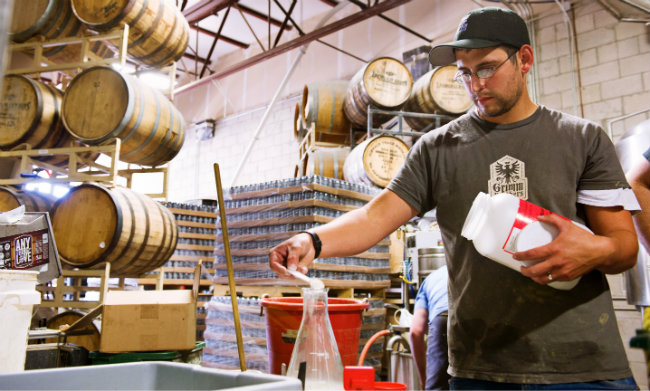 Since a brewery is a hothouse of innovation and a brewhouse like Grimm Brothers constantly makes pilot batches of new brews, the system also helps schedule seasonal releases and keep notes on recipes and processes. So if Grimm comes out with a delicious new beer, it doesn't just become a fairy tale, they reproduce it, precisely.

Another Colorado-coded option is Distillery Solutions, the ERP system developed by Westminster-based Jason Lippa, originally when the former rocket scientist worked with Stranahan's. Now more than 100 distilleries across the U.S. use his system, including Peach Street Distillers and Laws Whiskey House.

It was the system in place when Chris "Moose" Koons was at the former company, and now he's adapting it for use at Rocky Mountain Soda, which he co-owns, where a team is managing an ever increasing demand for its sodas and brands.

Distillery Solutions manages some of the same complexities as OpenBrew. "The ERP really helps with taxes," says Koons, critical for manufacturers of alcoholic beverages.

But for Rocky Mountain Soda, with a small employee base of seven, he says its tools are likewise ideal. "It's nice to have something that can keep track of everything. It can remind you based on lead times with purveyors when to reorder."

That helps a company like his where time is extremely limited. "When you try to be mindful it helps keep things from slipping through the cracks like the labels got spilled on and thrown away or something like that." In that case, it would alert them to re-order those labels.

Like The Maker System, Distillery Solutions helps with tracking employees' tasks. That includes checking up on sales people via its customer relationship management (CRM) tools. "I can look at distributors and see what they sold and look at gaps," Koons explains. "The CRM also allows reps to go out and take notes. Salespeople can be somewhat nomadic," he asserts. The system can help the team pick up where a sales person left off if they took another position. 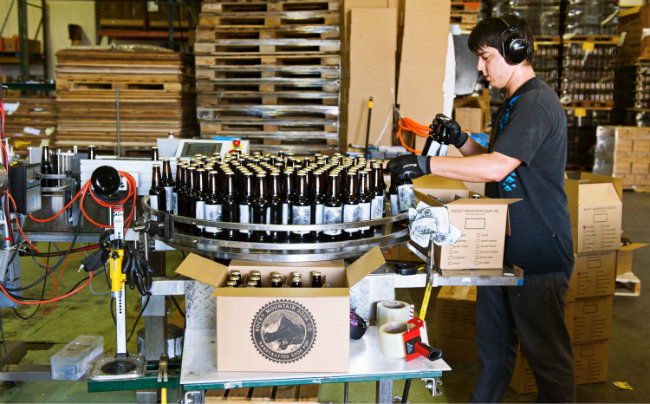 Rocky Mountain Soda is beta-testing Distillery Solutions for its purposes. "The beta is more for using it on a broad-level manufacturing basis," Koons says. "We don't have the tax complexities of a distillery."

The Real Dill isn't in a pickle over not having a ERP system, even though it has just seven employees and is seeing its sales skyrocket -- despite running out of labels on one occasion. "Our growth has been very incremental and that's very intentional," Park says. "That has allowed us to scale up one step at a time. without taking a step we weren't yet ready for." As such the company hasn't needed to look toward an ERP system, rather it's making small tweaks to operations and processes to meet higher demand.