Larkburger co-founder and CEO Adam Baker was GM at co-founder Thomas Salamunovich's Vail eatery Larkspur when the two got talking about a huge void in the Vail Valley's culinary landscape.

"There was no place for us to eat," says Baker. "There was fine dining and bar food and no middle ground."

So they took the beloved Larkburger off of the Larkspur menu and spun it off as just that: culinary middle ground or, as Baker puts it, "good restaurant food."

It comes down to taking a chef-driven approach to fast food. "Everything besides the bun is made by us," says Baker. "That's one of our differentiating factors." 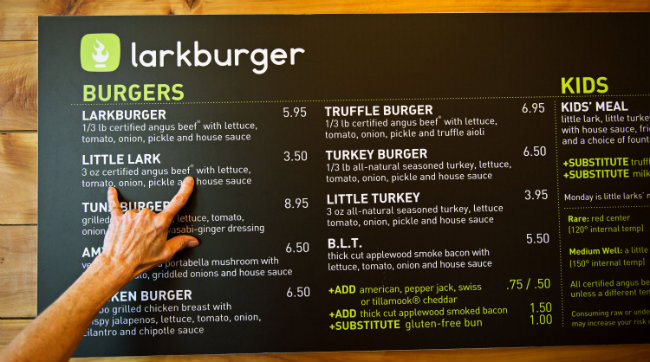 For example, Larkburgers are thick-cut and char-broiled to order. "It's a rounder flavor profile than the griddle, where you're cooking the burger in its own fat," Baker says of char-broiling.

Another differentiating factor: sustainable processes. "We care about what we're doing to the Earth," says Baker. Nearly everything at 11 of the 13 locations is commercially composted, including packaging, cups, straws, and food scraps. They also recycle cooking oil (Baker used to fill his converted Dodge pickup with it) and focus on energy efficiency.

Salamunovich saw serious potential right off the bat, says Baker. "He said, 'Let's open 100 of these. I said, 'Let's focus on opening one first.'"

They did just that. The first Larkburger opened in Edwards, 10 miles down valley from Vail, in 2006. The second opened in Boulder in 2009. There are now 13 company-owned locations, all of them in Colorado.

Baker credits Salamunovich's culinary chops with the company's growth. "My partner is a classically trained chef," says Baker. "What you don't find in classic cooking is sweet components added to the food." So the special sauce on a Larkburger is no sugary catsup-mayo concoction, it's house-made dijon mustard, lemon, and pasteurized eggs. "It's got a lot of nice acid that complements the meat," Baker explains. 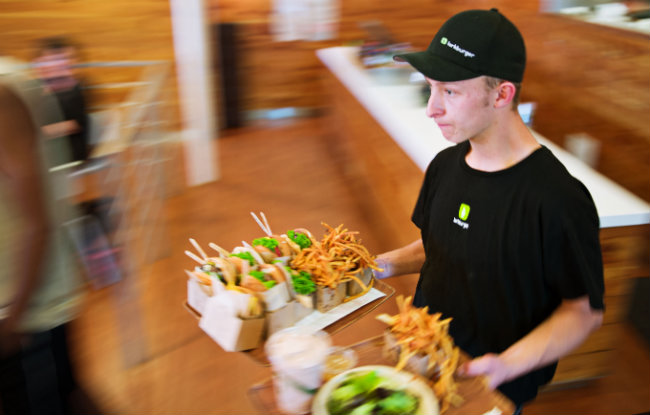 Larkburger also makes turkey burgers, chicken burgers, and tuna burgers, as well as kale, bibb-quinoa, and caesar salads with dressings that are made on premise.

Baker's not just the company's CEO, he's also a big fan of Larkburger's food. "Our tuna burger is spectacular," he says. "It's a whole-meat piece of tuna -- it's not ground. We sear it and serve it with a wasabi sauce, and it's awesome."

Likewise, he calls the chicken burger, topped with crispy jalapeno peppers and chipotle aioli, "a really flavorful, addictive sandwich." And don't even get him started on the hand-cut, truffle-parmesan fries -- the adjectives "addictive” and "awesome” might well pop up again.

Challenges: "One of our challenges is to stay relevant," says Baker. "We've got a great menu, but we need to evolve without compromising too much and staying true to what we are."

He says it can be tempting to "become all things to all people, which means selling out with our culinary stuff and the integrity of our food," but it's really about picking the right locations for the Larkburger vision.

"What's the next great spot?" Baker asks. "It's definitely a challenge, because it's a big world out there."

Opportunities: To answer the previous question: New York City and Southern California. "That's where the people are," says Baker, noting that the company plans to be in two new markets by 2016. "The demographics line up perfectly."

"I like New York City because it's a finite space," he adds. "There's new development all over the place in Colorado."

Also on Baker's expansion radar: the Midwest. "From Kansas City to Wisconsin, there are a lot of possibilities."

Needs: Baker would like to see a redefinition of full-time work in the Affordable Care Act, which he says "is not as ominous as it once looked." "I think a 30-hour full-time threshold is too low," he says. "I see a full-time work week as 40 hours." 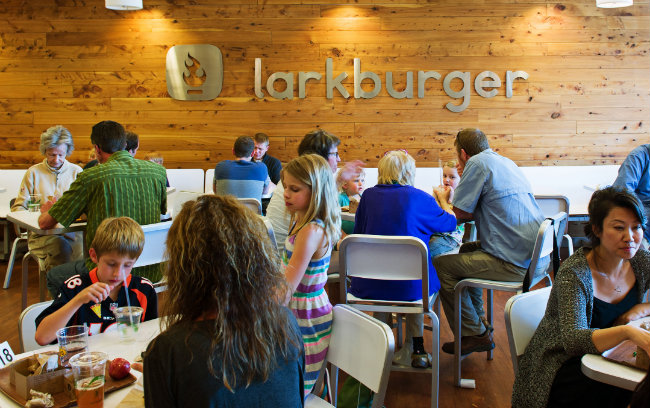